There are a number of reports online that focus on the screen quality of Google’s Nexus 7 tablet, and the amount of users reporting display problems seem to be increasing. The real issue here is the amount of people reporting the screen popping out compared to the number of devices sold, although the percentage of consumers reporting problems with their Nexus 7 has yet to be seen. The Nexus 7 wouldn’t be the first tablet to launch with screen problems, and we remember giving the iPad 2 a hands-on, which included LCD backlight bleeding that reportedly affected a certain batch of devices.

Interestingly it seems that the quality control of Nexus 7 screens might be worse than first thought, which is thanks to a range of issues being claimed. We’ve seen screen separation from hundreds of users, and one Nexus 7 owner said “the screen is popping out on the left side“, and they worry that if a replacement came would it have the same issues? Some people are waiting to hear Google comment on the problems.

Another report, seen in this article, claims the Nexus 7 is experiencing backlight bleeding similar to what we found with the second-generation iPad. This information came thanks to an image posted on Twitter, which you can see below and it clearly shows light bleeding from the edges. This example is pretty bad considering our experience with bleeding on the iPad needed a dark background, although the Nexus 7 bleeding in this photo is clearly on a white page. 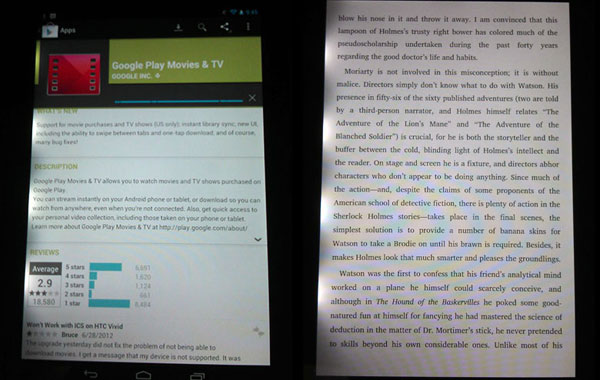 Until Google confirms the percentage of Nexus 7 faults when compared to sales, then we should take these issues as they are and not necessarily an example for all Nexus 7 tablets. The only problem currently is the lack of information from Google on the seriousness of these issues, which continue to grow with reports of dead microphones, dead pixels, touch screen issues, backlight bleeds, screens separating and popping out, and a few other minor issues.

Have you had any problems with your Nexus 7? It’s worth noting that a number of people have contacted PR, and they stated Google had been very helpful after explaining their problems. Some people have replacements on the way, and they’re hoping these don’t suffer from similar issues.

After having a quick look on YouTube we could see numerous videos showcasing issues with the Nexus 7 screen quality, and we have included a few of these below. The problems in the videos include the screen touching itself, phantom typing, screen flickering, and in the first video you can clearly see the detached screen issue. These problems follow the hundreds of complaints over shipping delays that plagued the Nexus 7 at launch.