The clash of two powerhouses has started in the tablet world that involves Google and Apple, although the Nexus 7 tablet is meeting a competitor nearly its own size in the form of an iPad mini. People looking for a full review of the iPad mini are out of luck at this time, although with the release date approaching next week it will be a lot more than specs and quick hands-on videos being presented for indecisive buyers.

Nexus 7 32GB proof in review — last week we touched on how Google has been pretty bad at keeping the 32GB Nexus 7 under wraps, which is thanks to non-stop leaks in one form or another. These have been consumers uploading videos and photos to show proof that they’ve managed to purchase the Nexus 7 in 32GB at both Staples and Office Depot, which can be read in more detail via this article.

Today we’re also hearing from a UK consumer that visited their local PC World to discover the 32GB Nexus 7, which they claim hadn’t been an issue to purchase. One of the favorite mediums for sharing information seems to be Twitter in 2012, and this is exactly what this 32GB Nexus 7 owner did by jumping on their Twitter account and told the world that the new model is real and available to buy if you’re lucky enough.

His Twitter account is called “TheChiefuk“, and this “dedicated father” explained that the 32GB Nexus 7 hadn’t been on display but after asking he had been able to obtain one. This obviously shows a lack of understanding from the staff, which shouldn’t have let the new tablet be sold. 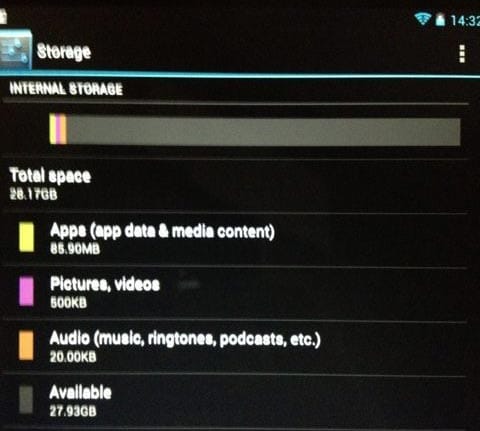 Have you been asking at your local US/UK store for the Nexus 7 in 32GB? The blurry image above had been linked to from his Twitter account to show more proof that he in fact has a 32GB Nexus 7, so take a look or head over to his Twitter account here.

Apple iPad mini review in full is near – you might not need much more than to see the specs and features for Apple’s new 7.9-inch iPad, and after you saw the hands-on reviews you had all the information you needed to make a choice from Google’s Nexus 7 vs. Apple’s iPad mini, but this isn’t the same for everyone. We’ll be giving our full review like many of the other technology websites once the iPad mini release date lands next week, and some people were not in a rush to order and want to wait a little while to read the full reviews and might even get hands-on themselves in a local store before deciding.

Are you going to purchase the new 32GB Nexus 7, or did Apple sell the iPad mini to you with its higher price?