We have a somewhat surprising news tip to bring you now, especially for those who love Nexus devices. Everybody is expecting to see the Nexus 10 2014 at Google I/O, but it appears that Google are still trying to squeeze the last few juices out of the Nexus 7 model in 2014 first.

While we would love to see Google appear on stage and announce a new Nexus 7 tablet, it’s no secret that the current 2013 model is still one of the best on the market.

Google senses that it is still popular too and we can see that a new offer has been set up on the Google Play Store. If you buy a Nexus 7 2013 tablet now, Google will present you with 3 months of unlimited access to Google Play Music.

Just so you’re aware, this is $30 worth of free music that Google are offering for nothing. After the three months, you will be given the option of continuing your subscription for $9.99 a month – nothing is forced on you if you don’t choose this option. 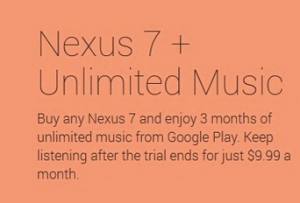 Google Play may not be as experienced as Spotify, but there’s certainly a great selection if you have used the service before. The deal will run until September 30, 2014 so there is plenty of time to decide, but unfortunately it looks like this is exclusive to US residents for the time being.

Are you interested in taking Google up on their offer as a music lover? The current price stands at $223 which is still very reasonable by today’s standards.