If you are currently having a problem deciding whether or not to buy the new LG G Pad 8.3 tablet, we have a quick heads-up on how LG’s device compares against arguably the best. That tablet is from Google, and it’s unsurprisingly the Nexus 7 2013 model which consumers continue to rate so highly.

Attention now seems to have shifted away from the Nexus 10 2 release date, which Google will instead release in 2014 after looking odds on to release during the Holiday season amid increased consumer demand.

Consumers are now on the hunt for alternative tablets and you’ll be pleased to hear that there are plenty for you to choose from. One of these is LG’s brand new G Pad 8.3, which many are already comparing to the Nexus 7 2013.

Specs of the LG G Pad 8.3 are very decent, offering a 1.7Ghz processor, 2GB of RAM, Adreno 320 graphics and 16GB of internal memory with the option of expanding on this further with MicroSD card. The Nexus 7 2013 on the other hand features a 1.5 GHz quad-core Snapdragon S4 Pro processor, 2 GB of RAM, the same Adreno 320 graphics setup and either 16GB or 32GB of storage memory. 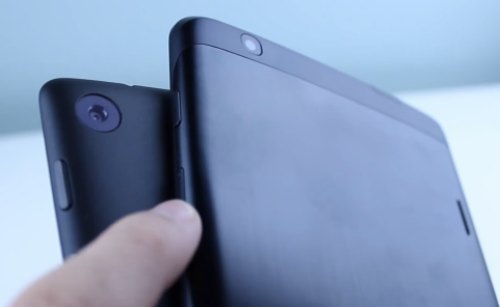 A lot of feedback has already come in on how LG’s tablet is a bit too expensive compared to the Nexus 7, despite the similarity in specs. Check out the included Nexus 7 2013 Vs LG G Pad 8.3 video review below, and let us know what you think about it.

Do you agree with us in saying that the LG G Pad 8.3 is very appealing, but a bit expensive at $350?