Google’s upcoming flagship Android device has been certainly dominating the tech columns of every website for the last couple of months. Google accidentally leaked the device during one of its Kit Kat promotional videos – video has been deleted -, indicating that the phone will have a rubber-ish back and a larger primary sensor over the last gen.

A new video just surfaced on the web showcasing a mute yet scrupulous hands on of the device. The handset indeed has the same design we saw in the Google video, though the person behind the camera went through the operating system as well. What’s interesting about it, is the fact that in software details it clearly states that the device is running Android Key Lime Pie – used to be rumored as the next version of Android before Google announced Kit Kat. Above that we also spotted that the model section says Nexus 5. In addition it appears that the screen of the fifth iteration will fit four apps per row, which is one application less compared to its predecessor. 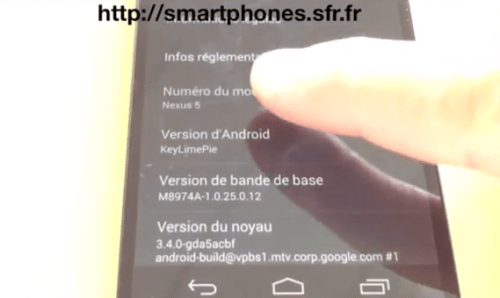 Moreover the video suggests that the front facing camera will be centralized this time and that the speaker grill will be finally relocated to the bottom of the phone – allow me to say that they share a striking resemblance with the ones found in the 5S. The specific model also has a “not for sale” sign on the back, in a way implying that this is not a retail unit but a prototype.

Take a look for yourself in the original video above (ostensibly courtesy of smartphones.sfr.fr).