The idea of testing how fast a handset is will involve much more than a boot test and while we have just that with Nexus 5 on Android 4.4 KitKat vs. iPhone 5S running the final iOS 7.1, we couldn’t help but feel this video lacks some much needed review information.

You can see a video below this article that found its way to YouTube at the middle of last week, and the 3 minute video asks which is faster between the iPhone 5S iOS 7.1 vs. Google Nexus 5 with Android 4.4 KitKat? The issue with the videos title is the fact it doesn’t really answer that question, well not in detailed way other than showing what smartphone boots up fastest.

You might have already seen this video and understand it to be perfect for those that turn their phones on and off a lot, although who really does that? What users want is to see how fast the browser is on iPhone 5S iOS 7.1 vs. the Android 4.4 KitKat web browser and of course a general speed comparison of the user interface. 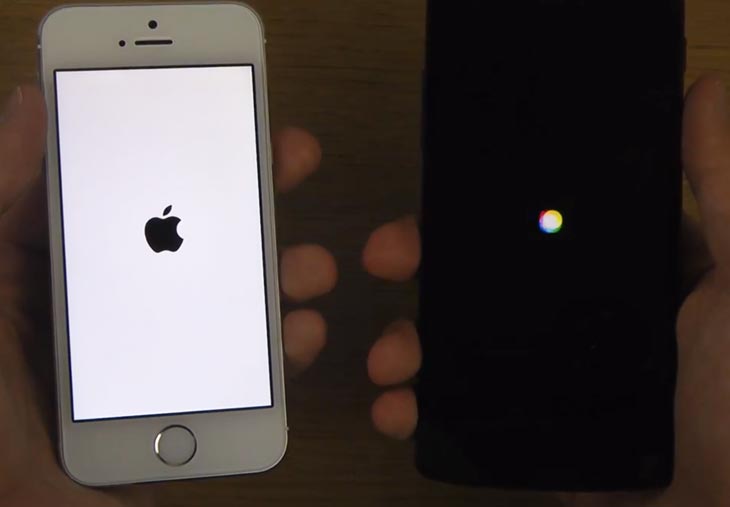 The need for detailed tests – considering iOS 7.1 only just released to public last week, it is clear a lot more tests need to be performed on the final version and certainly comparisons are needed between iPhone 5S with iOS 7.1 vs. Nexus 5, Galaxy S5, iPhone 5C, and even the Galaxy Note 3. These will land on YouTube in the coming days, but we managed to track down a few videos giving what insight is available right now.

We don’t have the more desirable comparisons right now, although you will find a few videos below looking at iPhone 5S iOS 7.1 vs. 4/4S/5 for benchmark speed. You will also see a browser comparison for Samsung Galaxy S4 / Mini running Android 4.4 KitKat vs. iPhone 5S running iOS 7.1.

What iPhone 5S comparison do you want to see now that iOS 7.1 has released with many improvements and how do you think it compares to Android 4.4 KitKat, or the Nexus 5 and Galaxy S5?

We also look forward to seeing detailed reviews of Samsung Galaxy S5 vs. iPhone 5S with iOS 7.1, which will start to land once Samsung’s new flagship phone reaches its release date around the world. It is worth noting that pre-orders for Galaxy S5 start in the UK at the end of this month, so the last video on this page gives you a quick look at the Samsung Galaxy S5 vs. iPhone 5S as well.