Now that the LG Nexus 4 has been officially outed by Google, many consumers will inevitably be making the decision in their heads on which handset is better between Google’s new effort and the iPhone 5, which is still considered to be the benchmark in the smartphone market.

As with previous Nexus devices, there is plenty of interest in the upcoming handset, not only because it will ship with the latest version of Android Jelly Bean (4.2), but also because the hardware specifications on paper appear to be very promising indeed and arguably better than what Apple can currently offer consumers with the iPhone 5.

For starters, the processor is a essential factor in any decision making over a new smartphone and you’ll be pleased to hear that the Nexus 4 has been equipped with a brand spanking new quad-core Snapdragon S4 Pro chip, offering 1.5Ghz per core. In comparison, the iPhone 5 still only ships with a dual-core based A6 processor although the company has made consumers aware that the A6 offers ‘double the speed’ than what was offered in the A5 chip with the iPhone 4S.

Elsewhere, the debate over screen quality is going to be a big talking point as well. The Nexus 4 may even eclipse the infamous Apple Retina Display as well, as LG has fitted a 4.7-inch HD IPS+ LCD display screen on the Nexus 4 with a resolution of 1280×768 and 320ppi, compared to the iPhone 5’s 4-inch Retina Display which boasts a resolution of 1136×640 with 326ppi. Basically both display screens are right up there with the best available on the market. 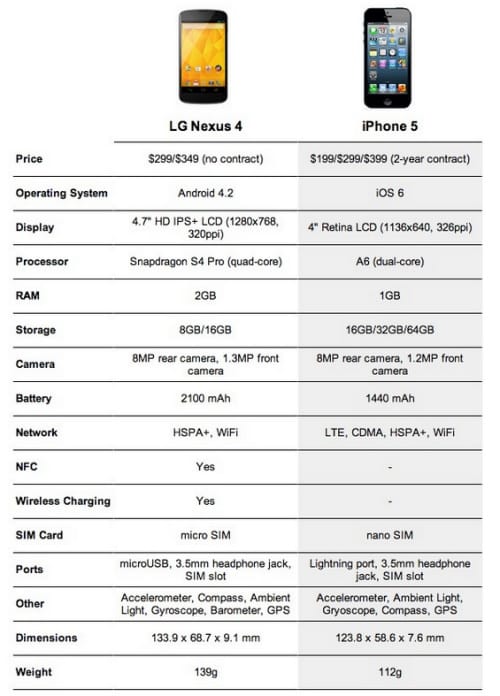 Looking down the useful visual chart supplied by Droid-Life, we see that the Nexus 4 edges the iPhone 5 in RAM (2GB compared to 1GB), battery life (2100mah compared to 1440mah) and has two features that are not available on the iPhone 5, those being NFC and wireless charging support.

Having said that, there is no running away from the fact that the Nexus 4 is not an LTE device and the iPhone 5 is. This is going to be a massive deal breaker for many already, so it will be interesting to see just how many consumers will be satisfied with just HSPA+, after previously using LTE on an older Nexus handset with the Galaxy Nexus – if that makes sense.

Take a look at the visual for yourself and let us know what you have decided to buy. Is the Nexus 4 the clear winner here, regardless of a lack of LTE support?