We are just hours away from Google’s highly anticipated I/O event at the Moscone Center in San Francisco. Excitement and speculation has been building up on a possible Google X phone to be unveiled in collaboration with Motorola, but there is also the little matter of the outstanding White Nexus 4 as well, which has yet to go on sale.

When the Nexus 4 initially launched, many consumers were under the impression that they would be able to choose from a white version as well, along with the traditional black model. However, it never happened due to unexplained reasons and the White Nexus 4 has managed to stay a mystery for over half a year.

We have had small leaks during this period, but perhaps the biggest has come just before Google’s event. The device has appeared in a video originating in Dubai, but not how you expect it. A white Nexus 4 would come with a white body all over you would presume, but now we have learned that Google may be offering the device with a white back cover only, with the front still featuring black colors. 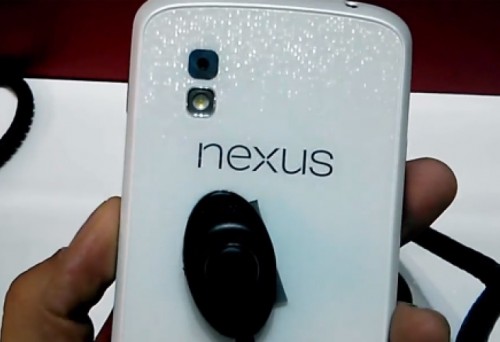 Watch the video above to see what we mean then decide what you think about it. We would have preferred to see a full white coating, but some of you may actually like the hybrid design on this occasion. The white crystalized design on the back certainly looks nice, while the reminder that the device is made by LG is still there to see as well.

Hardware specs are thought to be exactly the same as the original, while this device in particular is running Android 4.2 Jelly Bean. The device is also locked in place as you can see, since the video was apparently captured at a Qualcomm booth – giving further evidence that this black and white iteration of the Nexus 4 is definitely on the way.

What do you think about the mixture of colors? Would you prefer to have a white paint job all over or not?