Amidst all of the woes regarding Nexus 4 stock troubles in the UK and US, we do have some pleasing news for those lucky enough to already be in possession of a shiny new Nexus 4. Google has been working on a fresh update of Android 4.2 and we’re pleased to hear that Android 4.2.1 Jelly Bean is now available to download either OTA or manually if you haven’t had the notification yet.

As most of you are probably aware, Android 4.2 came with the Nexus 4 out of the box and the new version shortly made its way to other Nexus devices such as the Nexus 7 and the Galaxy Nexus. However, there were a considerable amount of bugs present in Android 4.2, which is why you’ll be pleased to see a swift Android 4.2.1 which alleviates some of the stress.

More specifically, the infamous December bug that was discovered inside the People app has been fixed, as noted by Droid-Life. Other than that there doesn’t appear to be any other major changes, so you’ll have to see what else you find once you’ve updated. The file is very small at just 1.1MB and the new version has been identified with a build number of JOP40D. 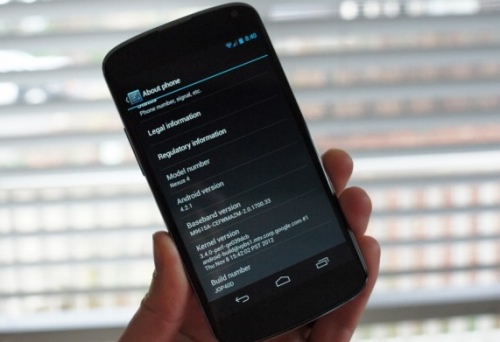 If you haven’t already had an official notification to update to Android 4.2.1, this zip file from Google will contain the installation needed to update to the new version manually – just ensure you know what you are doing beforehand though. Nexus 7 and Nexus 10 users should also pay attention, as the Android 4.2.1 should be rolling out to you as well – let us know if you have received anything from Google yet OTA.

While Google proves their point by bringing a quick update to the stock Nexus 4, carrier versions of other Android handsets such as the Galaxy S3 on Verizon is still stuck on Ice Cream Sandwich, with users desperately awaiting an update to Jelly Bean 4.1.

We’ve seen the frantic sprint to snap up a Nexus 4 from the Google Play store over the last 24 hours, but did you manage to get through at the second opportunity or was it another frustrating experience?