Apple holds the tablet crown without a doubt and this set the iPad 4 and mini up for success the moment they launched, but we’re seeing Google gaining a massive following with their Nexus 10 / 7 tablets with users becoming increasing passionate about why the Nexus 10 is better than the iPad 4 in their opinion. Tablet newbies find it hard to get past the price difference when looking at the cheaper Nexus 10 with iPad 4 beating specs, and they wonder why Apple charge more for delivering less in terms of specs?

As an owner of both the Nexus 7 and iPad mini we understand the differences in build quality, and Apple charge more for metal and other more expensive materials used when building the iPad 4. Android fans explain that the hardware inside the Nexus 10 counters this, and they’d rather have a plastic exterior with better specs inside, but then we have to consider the price difference as well. Google sell the Nexus 10 from $399 and Apple sell the iPad 4 from $499, so this is a clear price gap that will be important to users on a budget.

Google Nexus 10 stock problems and price hikes — it’s no secret that Google has had issues keeping the Nexus 10 in stock at their play store, although you can currently see the 16GB Nexus 10 tablet shipped within a week in the UK and US. The same can be said for the Nexus 7 tablet, although their Nexus 4 smartphone continues to feature a sold out message thanks to popularity being too much for Google to keep up with. The stock problems are resulting in some retailers increasing the price of the Nexus 10, and we’ve seen a number of online stores adding an extra $100 to the Google play price. 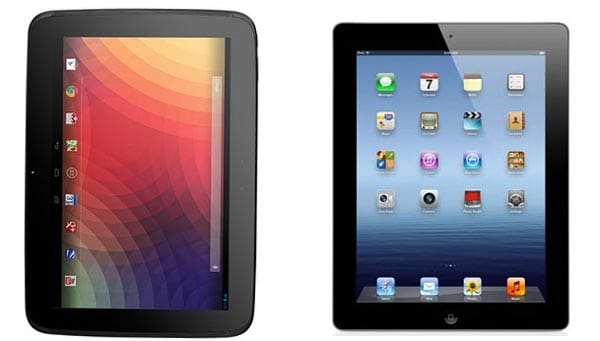 This page on Amazon shows a Wi-Fi only Nexus 10 with the latest Android 4.2 Jelly Bean, but it is priced at $549.99 that’s around a $150 premium on the Google play price. We also looked at Google’s shopping portal and see a number of stores selling the Nexus 10 over $500, again this is much more than the $399 price on Google play. You can see why there are stock problems if the price is always lower directly with Google, and also the reason why people are so desperate to know when stock is available at the play store.

Would you pay a higher price for the Nexus 10 when compared to the iPad 4? If you end up paying more than $500 for the Nexus 10 then you’ll be paying more than the iPad 4 price, which might sway some people to pick up Apple’s tablet instead. The 4th generation iPad seems to keep the recommended price without hikes taking place at 3rd parties, and shipping times on Apple are currently right away with an in stock message being displayed. You can see the Nexus 10 vs. iPad 4 in a visual review via our earlier article.