We all know how important it is to save money these days and as many of you will be aware, there are plenty of websites and applications available that can help you do so. For example, price comparison website Nextag has recently launched its new Dealforce app for iOS devices.

What’s the Dealforce application all about I hear you ask? Well according to a recent article by Dusan over at intomobile.com, it’s a brand new social-shopping app that enables users to add any deals they discover, as well as share them with other Dealforce users in their area.

To make this possible however, the Dealforce application relies on a GPS receiver in order to pinpoint a user’s location and include it with the information on the deal. The app also enables users to interact with one another, as well as show their appreciation by ‘Loving’ the deals they post. 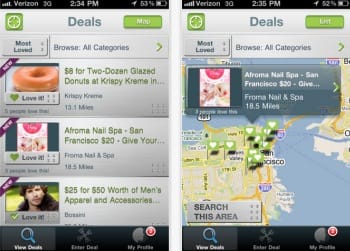 The application also comes in very handy for merchants, as it also enables them to post their hot deals and hopefully gain more business in the process. The Dealforce app is only available on the iPhone, iPod Touch and iPad at this stage, but Nextag is planning on releasing an Android version.

As noted over on the itunes.apple.com website, the app does require your Apple device to be running iOS 3.1.3 or later. Do you currently use any deal apps? If so, which ones?