With the Clash of Clans bowler update now finished, we wanted to look ahead as we always do and get your feedback on what new features you would like see for the Clash of Clans April 2016 update, with fans eager to find out what’s next.

Supercell will no doubt be listening to the community for ideas, so now is the chance to get your request across and see if it gets considered as an official feature for the next Clash of Clans update.

In the meantime, we can see that some of you have already been sending your ideas to Supercell on Twitter. 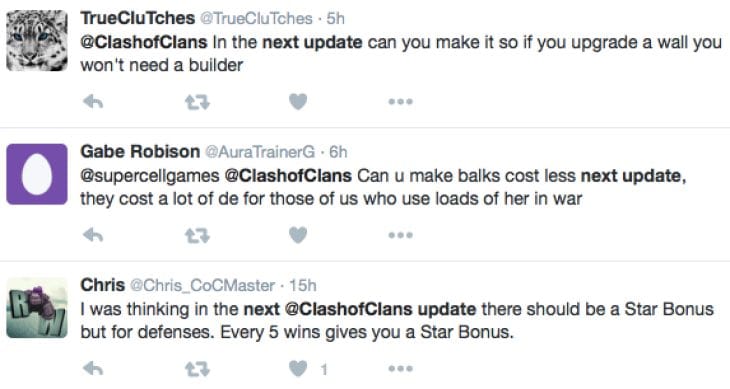 They include suggestions such as upgrading walls without the need for a builder, a new star bonus for defenses, the option to gem builders and speed up build time and also a tweak to the War log to show a streak of the last 10 games.

Those are some nice ideas, but do you think Supercell should implement any of them into the next CoC update for April 2016?

Let us know if you have a better feature request and we will update this article soon once we have official details on what is coming next for the game.

Update: You can see that fans are loving the idea about upgrading walls without a builder. Also, another great request includes the option of sharing replays remotely.

Keep the ideas coming and let’s see what else the community can come up with.