As most of you are probably already aware, Apple recently launched a new Apple TV update to 7.2.1 adding plenty of security features to the device and going into specifics on what exactly has been fixed.

Confirmation of the security update can be seen over at Apple’s website here and applies to the Apple TV 3rd generation model. Unsurprisingly though, users are curious to find out the full nature of this security update and more importantly, what is coming in the next Apple TV update.

It’s worth pointing out that this is the first Apple TV software update for 2016 and the first one since April 2015 when Apple launched Apple TV 7.2. 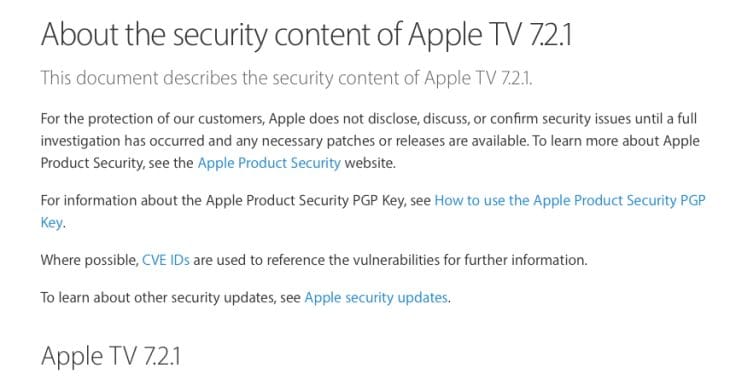 Some of the changes include security fixes to CloudKit, ImageIO, Kernal and WebKit so if you are worried about security risks to the Apple TV you should definitely take a few minutes to read through.

Now that this massive security update is over, will Apple now focus on new functionality for the next update – Apple TV 7.2.2 or Apple TV 7.3?

Let us know your thoughts on this update and your personal wishlist on what you want to see next for new features.