This is our first impressions of FIFA 12, which is due to be released at the end of this month and looks to completely change the way you tackle, making it that much harder for those new to FIFA games.

When you first start playing the FIFA 12 demo you’ll noticed a slightly different feel to the game with nothing jumps out as a major change to its predecessor, although this line of thought starts to change the longer you play the demo.

The matches are only 3 minutes a half, this goes extremely fast, so you’ll find yourself pressing rematch a lot. After an hours play, maybe sooner for die-hard fans, you’ll notice a few key changes to FIFA 12. At first it was the natural look of players and the more lifelike feel to the game that was noticeable, then you start to find that this version will be no pushover when it comes to tackling.

In FIFA 11 the newbie player, and so-called “lazy tackler”, could easily hold down R2 and X buttons on the PS3 controller and this would chase down the player with the ball, and then tackle them automatically. This practice was a pretty good way to get the ball, and only those much more experienced could find a better way. In FIFA 12 these same buttons will also chase down the player with the ball, but this time they will not tackle the opposing player. 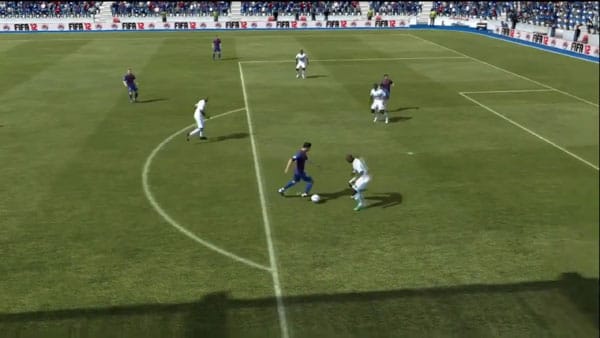 This small change makes it a lot harder for the newbie player to tackle, and means you’ll need skill to win the ball back. The demo reviewers and those that have early access to the “almost” final code both rate the game high, and while most of the changes are “under the hood”, after playing the demo for an hour you get a feeling of “I want the full game”. Going back to playing FIFA 11 feels very different and “older”, showing that the little things add up to a much slicker game. 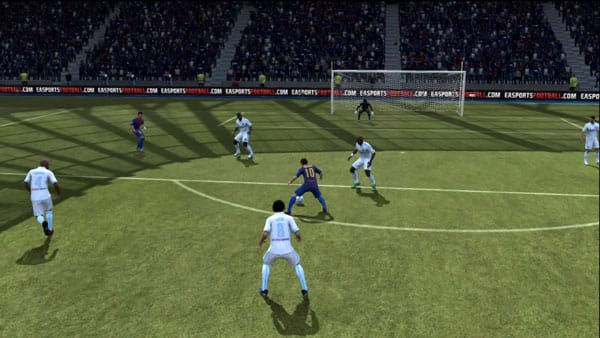 Little things like the spinning EA logo have a nice feel to them, making it feel like you’re watching a big match on TV. The presentation of the game has a bigger “wow” factor. You can see a video below this article that shows FIFA 12 precision dribbling in action, with tips on how to dribble slow and with skill.

If you’ve played the demo, how have you found the new tackling system? Do you like it, and how much has it challenged you? You may want to read about new FIFA 12 features in this article, and a transfer update preview here.