If you are in one of the most liveliest cities in the world next week, then you might want to mark April 3 — 12, 2015 in your calendars, as these are the public dates for the New York Auto Show. However, even before that there are the press days, which gives us a heads-up of what to expect, and so allows us to know which booth to head to first.

The good thing is, there are still plenty of tickets to be purchased, and once you have done that, then you may want to study the New York Auto Show schedule of events for 2015. 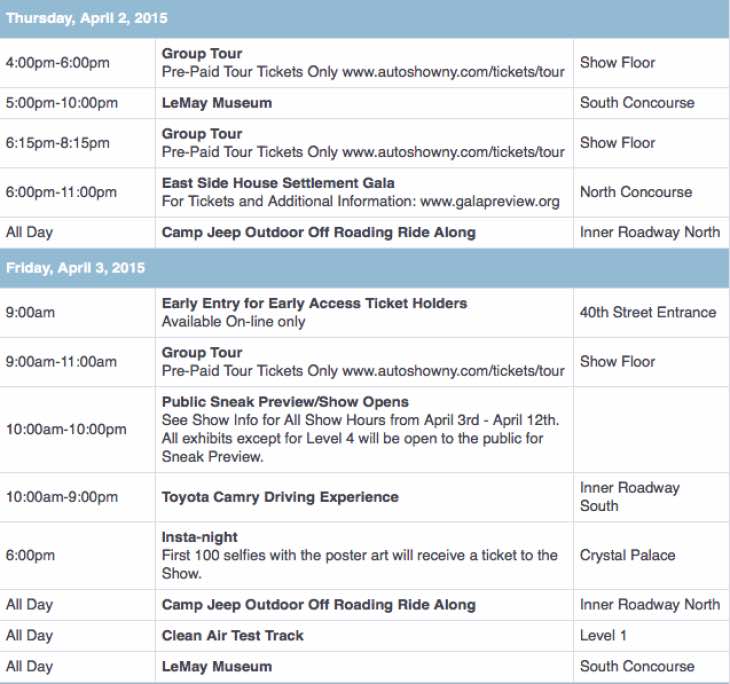 As you can see, these have been broken down day-by-day, and most of these events are included in the price of your ticket, unless stated otherwise.

Included in the schedule are the times that these events start, the name of the event and where you will find them, such as the show floor, 40th Street Entrance, Inner Roadway North etc.

To help you further you can study other show information, such as the NY Auto Show 2015 Exhibitors and Floor Plans, which means you have less chance of getting lost. Not only that, if you have a particular model in mind, such as the new McLaren 570S Coupe, then you will know where to head to, and in doing so beating the rush.

Ok, so we know that there are other new vehicles coming to the show that could take your fancy, such as the 2015 Kia Optima, 2016 Ford Focus RS or even the 2016 Lexus RX .