The New York Auto Show 2016 countdown is almost down to single digits now, as we are currently on 10 days. The event begins on March 25 and runs to April 3. However, press days run from March 23rd to the 24th, and we can already see a huge amount of excitement building.

Before we look at what we can expect from the show, we thought you might like to know what the ticket options are, even though the New York Auto Show 2016 tickets are now limited in numbers.

It’s $16 for an adult and $7 for a child. Although if you want to pay $38 and $17 respectively, then this will get you early access for an hour before. Tours by automotive experts start at $53, and there are still a few groups tickets option, full details of which can be found on autoshowny.com. 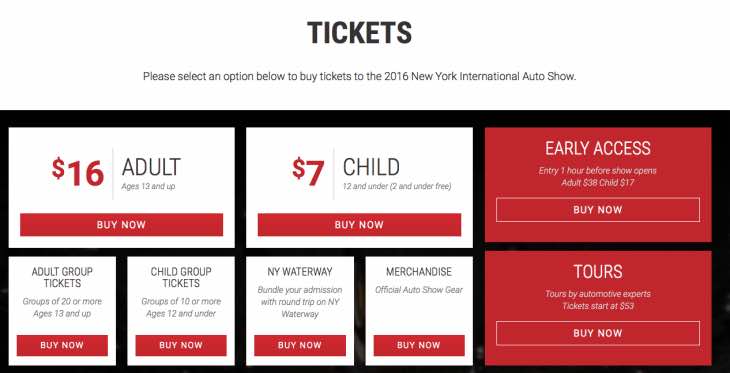 New cars expected to be announced during the 2016 New York Auto Show press days are the 2017 Toyota Highlander. Certain exterior features have been redesigned, although don’t get over excited with the changes.

Porsche have confirmed that they will be brining a four-cylinder Macan to New York for fans to drool over. The 2017 Buick Encore is expected to strut its still during next week’s motor show, as will the all-new Acura MDX.

Finally, two other models to look out for during the show are the 2017 Mitsubishi Outlander PHEV and the Mirage G4 Sedan. Ok, so these are not exciting models, but we are sure there will be a few surprises thrown in.