The New Year 2014 countdown has entered under 24 hours for most areas of the world and while you cannot be there for every celebration, you can use the EarthCam app called New Year’s Live for iPhone, iPad and iPod touch. The exclusive webcams include a live feed for the New York City fireworks in Times Square that will be spectacular, as we countdown to New Year 2014 in NYC.

You will be able to see multiple live webcam views of the New Year 2014 countdown in NYC, although the EarthCam app will set you back $3.99.

The price might seem a little high for most iOS users, but then when you consider the quality of this app along with a live video feed that includes audio and will feature NYC’s New Year’s Ball along with the amazing fireworks display.

There is a lot more to this app than just cameras at Times Square and you can see many more cameras that are all geo-tagged, so you can use the interactive map to find their precise location. 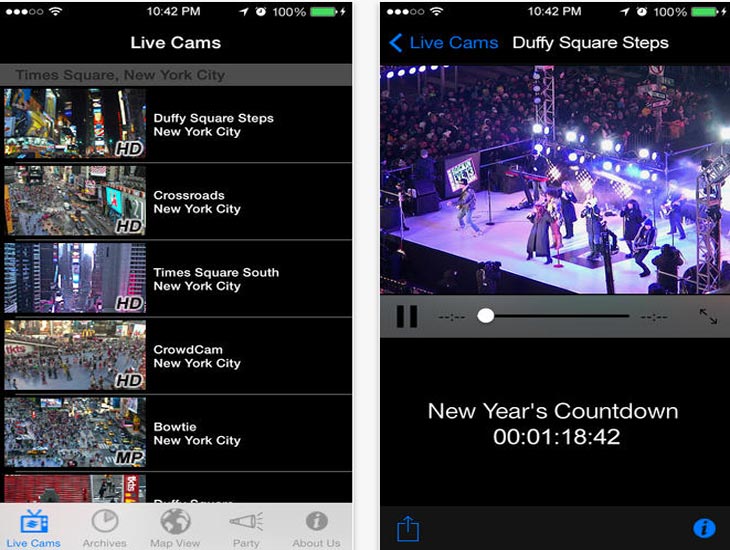 EarthCam’s app wouldn’t be complete if it didn’t include a New Year 2014 countdown, so you will also find this virtual countdown clock within the app as well to make sure you wish everyone a Happy New Year bang on time for the selected part of the world.

Other features that make the app more worthwhile include a virtual photo booth with themed costume pieces, which allow you to share directly on Facebook and Twitter. The Party Box will deliver a range of sound effects from cheers to music, although you don’t need to worry about forgetting the special moments as you can archive everything in the special Archives feature and relive the fun later on.