You may already be aware that Verizon is offering their customers a chance to upgrade to an iPhone, even if they have recently purchased another handset; more on this in Alan Ng’s post from yesterday. However, we now have information that Big Red is to also offer a trade-in deal for existing AT&T iPhone customers.

Verizon have always had strong sales, but MarketWatch reports that sales have slumped recently, which seems to have something to do with customers waiting for the iPhone 4, which will go on sale on February 10, 2011. This slowdown was to be expected, as we have known for sometime how popular the Big Red version of the Apple smartphone will be. 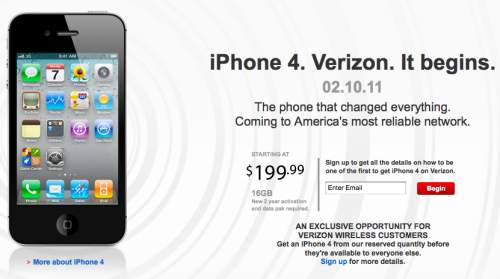 Verizon knows how much of a big deal the iPhone 4 will be to them, which is why they are to offer an unlimited data plan for just $30 per month. Jamie Pert notes that AT&T might have to respond to this, as they scrapped their unlimited plan last year.

How do you think that AT&T will react to these new incentives from Verizon, which as we can see is focused at taking as many iPhone customers away from AT&T as possible?