Now that the changes to the Twitter website have been available for a good while, what are your impressions of the new layout after having some hands-on time with it? Do you like the new look Twitter or did you prefer it the way it was?

The creators of Twitter are claiming that the new updates will make Twitter much faster than before and much more user-friendly to beginners of the social-networking phenomenon.

Changes to Twitter include a new two-pane interface which replaces the old single-panel look and offers a much more interactive experience while looking a lot cleaner than the old version. 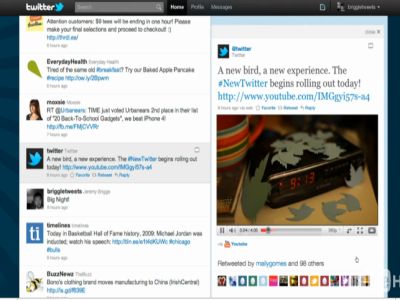 You’ll also see that embedded media has also been added, whenever you are looking at Twitpics or Videos. My personal favorite though is the inclusion of continuous scrolling, which will now display older tweets at the bottom, eliminating the need to keep pressing that more button.