We have a further treat for Skyrim fans now, as a new batch of screenshots has hit the internet, showing off some brand new imagery from the game, including an image which serves as a hint on how the Dark Brotherhood assassin’s group will operate in the game.

The new screenshots show off a variety of content in the game, including new race models, an enemy which looks very similar to a frost atronach, one of Skyrim’s many worship shrines, a new dragon pose and also a magical skill attached to a bow weapon.

We have already told you that the Dark Brotherhood clan would once again feature in Skyrim, and it was easily one of the most popular guilds to join in Oblivion, not only for the acts of violence you could take part in, but the rewards given to the player for completing tasks. Below is a new screenshot showing one of the messages you’ll receive from the Brotherhood, which we’re guessing is the message you’ll receive once you acquire their attention for the first time. 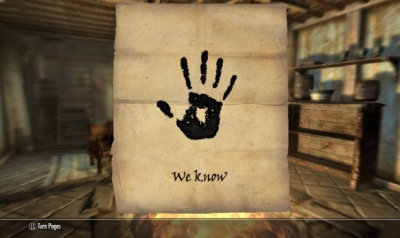 This next screenshot shows off Azura’s shrine in Skyrim and if you played Oblivion, you’ll know that it looks a lot more visually impressive compared to the two games. In Oblivion, you had to provide Azura with a glow dust and complete her trial to which you were rewarded with the ultra-effective Azura’s Star, which was a priceless reusable Grand Soul Gem. Will Bethesda include the same prize again for completing her tasks in Skyrim or do they have something totally different in store for players this time? 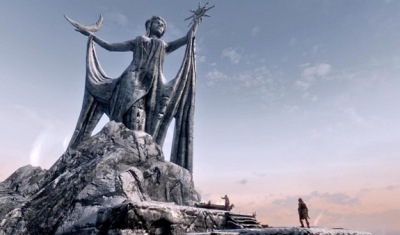 If you want to see more screenshots, head to Gameranx here for the full list. Just for your reference, all the shots were apparently taken from the Xbox 360 version of the game, so it’s great to see how stunning the game is looking on all three platforms – shame we can’t say the same about Battlefield 3, but that’s another story.

How much are you looking forward to Skyrim? Does the shot of Azura’s shrine give you a pleasant memory from Oblivion? How useful was the Azura’s Star item for you in the previous game? On a side note, the map for Skyrim has been revealed, check it out here for info.