It just gets better and better for Skyrim players. With the memory problems aside that some gamers are facing, the release of the creation kit this week has put everyone in good spirits. Maybe not so much for console players, but Bethesda has released some new footage which could provide an indication on possible DLC for both console and PC platforms.

In what can only be described as an ultimate tease, Bethesda’s Todd Howard has revealed some brand new, unseen footage from the game, showing all kinds of new gameplay which were designed by Bethesda’s team as a task during an annual brainstorming week, referred to internally as Game Jam.

Players have been salivating at the prospect of riding dragons in Skyrim and thought that this feature may only be possible via unofficial mods on PC, but we see Bethesda showcase dragon mounts in their video, which obviously means that it could be a possibility for console DLC in the future. That’s not all we see though, far from it as there are tons of new features that current players would love to see in the game.

There’s even a glimpse of the fabled giant mudcrab, which looks pretty awesome we may add too. Other new additions that we may be seeing as DLC can include wearbears, flying vampires, mounted combat, kill cams, spear weapons, and wait for it brand new skill trees as well. 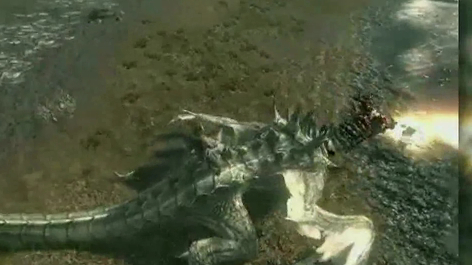 One example of a new skill tree was highlighted in the video, and showed off all new unlockable abilities for the werewolf. This has been another feature that has been requested by the community, so it’s great to see Bethesda put some of these ideas to their development team and see how they look in reality. There are many possibilities that Bethesda can expand on the werewolf character, and these new skill trees are a great start.

One important issue raised by Todd Howard though, is whether all these features would appear in the game as DLC, or if they will just appear as free downloads in future patch updates, as Howard teased below:

We’re not sure about you, but we wouldn’t mind paying for those werewolf skill trees, the giant mud crab battles and the ability to play as a werebear, as long as the price is reasonable of course. Take a look at all the features below and let us know what you are most excited about seeing.