With MWC 2011 to start on February 14th it is now that all the rumors begin to heat up, such as the new Samsung Galaxy S2 handset coming with LTE. There is no official confirmation of this, but Engadget say that the not-to cryptic message “evolution is fate: on a picture seen on the Samsung website is a sure sign of Long Term Evolution.

That’s not all, the Galaxy S successor is also expected to get a dual-core processor — but so will most other high-end smartphones this year, as well as the iPhone 5. This handset promises to offer even greater speeds than the Infuse 4G, as that only has a single-core and HSPA+ instead of LTE. 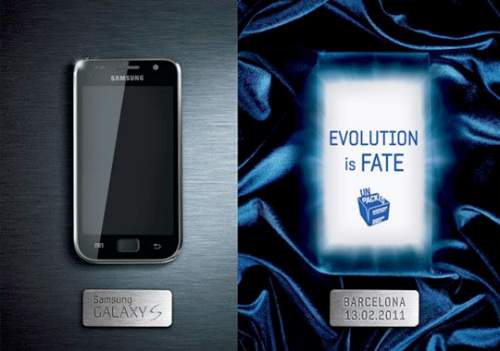 Even though MWC starts on Feb 14, there will be a full unveil of the new Galaxy S handset a day before, but Sammy does promise to offer more details on the first of next month — not too long to wait then? Here we have a list of expected specs for the Galaxy S2.

Unwiredview explains that Samsung should also unveil two mid-range Galaxy handsets, the Ace and Suit. Do not expect too much from these in hardware or the most up-to-date Android OS. So what will the new handset be called, Galaxy S2 or something else?