It looks like Sony are finally ready to announce the PS4 price cut in 2015 that everyone has been waiting for. We don’t have the announcement yet, but one major US retailer appears to have jumped the gun early by publicly leaking the information.

Sony has previously stuck to their guns after seeing numerous Xbox One price drops since launch, being adamant that their console was still selling extremely well with no PS4 price drop needed. 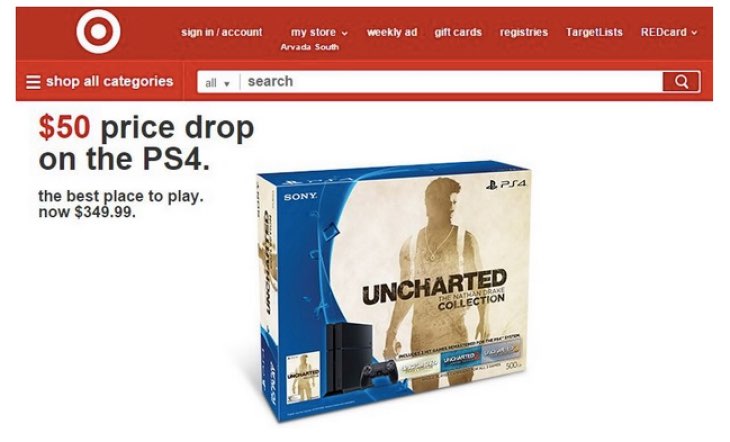 There is some initial points to make on this, as we have heard that the $50 price drop actually relates to a $50 gift card being offered on Target’s $399 PS4 console packages.

Still the screenshot above suggests otherwise, so all eyes are on Sony this week to see if Target has made an almighty slip-up ahead of Sony’s Paris Game Week 2015 conference – which replaces their GamesCom keynote remember.

It’s worth pointing out that the $349 price featured on the Target website is nowhere to be seen now, so it may have been yanked already.

Give us your thoughts on this and whether this is a game changer for you. Any Xbox One owners out there, who would consider moving to PS4 at $349?