From the moment that customers started to receive their Notion Ink Adam devices early, they found that they were bricking. We recently offered details on how to overcome this issue — but it was not an official fix. However, Notion Ink has now started to send their new devices out with a pre-installed update to the software to solve the problem.

Also those who already have an Ink tablet will be advised by the company what they have to do in order to avoid their product from bricking, that’s according to Android Community. The order process had stopped for a while to understand why the tablets were bricking, which would have cost the company.

Thankfully you will soon be able to order your Notion Ink Adam, which as we know is one of the more elegant tablets on the market. We had assumed that it was an issue with the Android 2.2 OS, but it turned out to be something to so with Mail’d source code. You will be pleased to know that once Android 3.0 Honeycomb is released the Ink tablet will get the update. 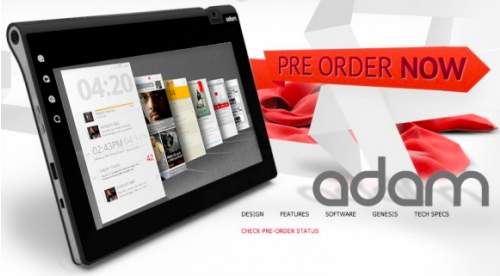 The Motorola Xoom will also get the new Android OS, as will some other tablets. This OS has been specially designed for use with tablet PCs, we have been told that it will not be available for smartphones. Alan Ng managed to get hold of a screenshot, which you can see for yourself here.

For those who wish to wait for the second-generation version, then Liliputing is reporting that it should be with us in 9 to 15 months time.

Did the recent Notion Ink Adam bricking issue affect you?