Microsoft need to get its act together if they want their new MSN homepage to be the success they want it to be. We know they have had a redesign, which has been an issue for users with outdated browsers, but it also lacks in terms of design when being viewed on an iPhone. The reason we say this is because there is a lack of features, and a huge issue when viewed in landscape.

The first thing we noticed when we went to the new MSN homepage on the iPhone 6 was that there is a complete lack of social logins seen on the desktop version of the webpage. The desktop version has Facebook and twitter social buttons at the top of the page, as well as Skype. When you look at the page on the iPhone, these buttons are nowhere to be seen, which surely has to be an oversight on the developers part? 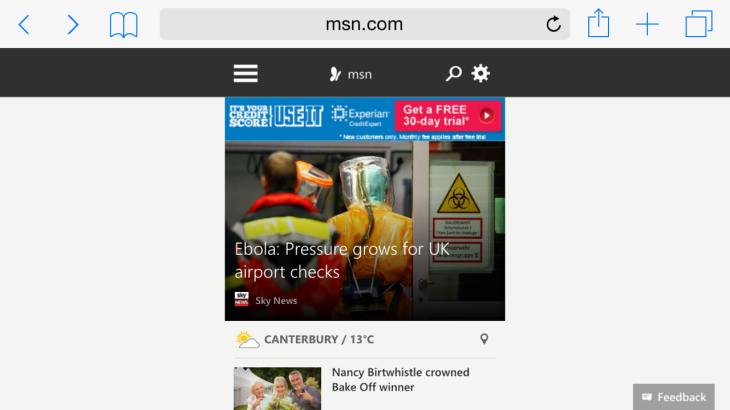 That’s not the worst thing, get your iPhone 6 and visit the MSN.com page and then turn it on its side. The content on the page goes long and skinny, with a huge amount of white space to the left and right. This is poor developing and needs to be addressed.

We cannot be sure if this is a problem specific to iOS 8 or the iPhone 6, as we have just gone onto the MSN homepage from an iPad Air still running iOS 7 and the design is the very same as the desktop version.

People seem to be very unhappy with the new design anyway and wish it would revert back to the older style, one of our readers even told us he will now be getting his online news from CNN, along with another who said the images look way too large on a laptop – although still not as bad as the basic skyscraper design when viewed in landscape mode on an iPhone.