Lots of gamers have been criticizing the Modern Warfare 3 developers and saying that it looks like Modern Warfare 2 with new maps and new perks, but we beg to differ, not only is there Spec Ops Survival and Kill Confirmed game modes, but we also have a new Strike Chain System to take advantage of.

Recently a new Call of Duty: Modern Warfare 3 multiplayer gameplay teaser trailer showed up on YouTube, we have embedded this video at the end of this post and it shows many brief aspects of online play, at one point we get to see the blast shield in use and also we get to see the Recon Drone which is one of the Support Strike Chains available in the game.

The Recon Drone is a drone which you control and fly over your enemies, when you spot enemies they will be “tagged” which basically means that you and your teammates will be able to see the enemies you spotted on the radar (we’re not sure how long they will stay tagged for). Below we have embedded an image showing the recon drone in action, as you can see it is quite affective (as long as your enemy is not hiding via perks), also if you look closely LB / L1 will allow the remote control helicopter to descend, whilst RB / R1 will allow it to ascend. 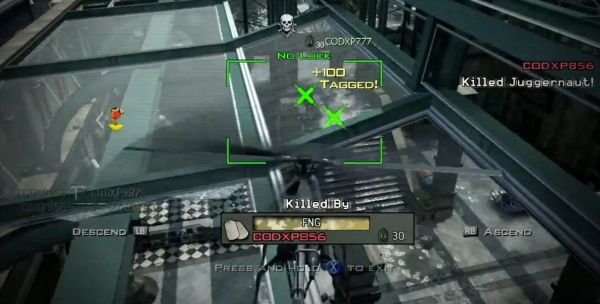 If you read our Ghost Recon Future Soldier article which we postled roughly three weeks ago you will see that the Recon Drone in MW3 is a lot like the drones which Ubisoft is bringing to GRFS, Drones were great in previous Ghost Recon games so we really think that this is a great addition to Call of Duty multiplayer gameplay and will come in very handy when playing objective based games such as Search and Destroy, Capture the Flag and Sabotage, do you agree?

For those of you who aren’t clued-up about MW3’s Strike Chain System check out this link for full details. Remember to check out the video below and let us know if you spotted anything else which looks exciting.