The new MacBook Pro GPU is most likely a Cape Verde for Apple’s May 2015 refresh. The specs were first teased on Reddit and leaks released on Twitter, but final confirmation came later on after a screenshot for GPU-Z.

This program helps to discover what’s inside computers when it’s less obvious, so in this situation you could identify GPUs by looking into the register entries. You can see the AMD Radeon R9 M370X graphics card replacement named in the screen below along with its device ID and other specs, which include GDDR5, 4.5GHz VRAM, a 800MHz core, and more. 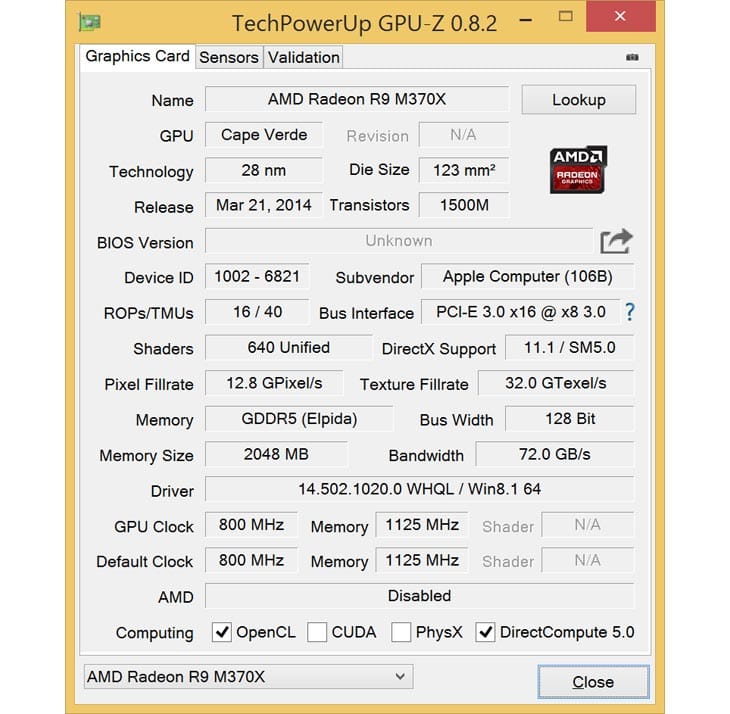 The AMD Radeon R9 M370X graphics upgrade is said to be around 80 percent better than GT 750M, according to Apple. If you are hands-on already, then we’d love to hear your first impressions with the graphics and new 2015 MacBook Pro.

While we cannot confirm the findings above first hand, Cape Verde is pretty clear with this Imgur uploaded screenshot of GPU-Z running on a 15-inch refreshed MacBook Pro in Boot Camp. The evidence is given more weight considering these new M370X model laptops started shipping right away, making it easy to prove with tools as seen above.

We will publish a full hands-on video review with the new MacBook Pro later today.