Following on from our earlier report which seemingly pinpointed the arrival of the Macbook Pro on February 24th, a new report has detailed a full list of new specs for the Macbook Pro refresh, some of which mention features which we’ve already told you about.

As reported from Apple Insider, an article published over at French website Mac Generation has dished the dirt on what is expected in the new Macbook Pro models, although this information is all according to their ‘trusted source’.

Since we haven’t heard a full list of specs prior to this report though, you’ll definitely want to know what has been said. Firstly, it looks like that feature we mentioned a few days ago, in which Apple will be equipping Macbook Pro models with an SSD drive to boot up Mac OS X is now all but confirmed. The drives have now been identified as 16GB Go SSD mSATA drives.

It looks like Apple will once again continue to offer varied specifications depending on which size Macbook Pro you choose to buy, but the good news is that 13-inch models could replace the Intel Core 2 Duo processor, with a much faster Core i3 chip. Other specific features to the 13-inch model could be the inclusion of 3 USB ports – another minor refresh which could make all the difference with consumers. 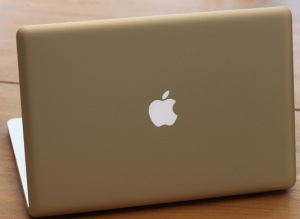 Other features of the 13-inch model include an optional matte screen and an impressive 12 hours of battery life. Mac Generation has even put pricing down for the new models, as they believe Apple’s two 13-inch models will be available for â‚¬1,199 and â‚¬1,499.

They have also listed information for the 15-inch and 17-inch new Macbook Pro models, head to their website above for the details. We remind you again that this information hasn’t been verified yet, but it’s a pretty huge leak if you think about it.

What are your thoughts on the specs mentioned? We think that 12 hours of battery life is a major incentive for picking this up, and the price was always going to be pretty high for a new Apple product. We’re glad that the processors have been upgraded, although theres no mention of glass trackpads which was a rumored feature we told you about recently.

Do you think these specs are real or not? We’ll inform you when we hear more. Don’t forget to keep an eye on the Apple store in case of any updates.