The past few days have seen a number of rumors regarding the a MacBook Air refresh, and it now looks as though we could be seeing a new model for 2011 sooner rather than later. The reason for this is because Apple has started to ask if 3G would be an option that users would want?

We have already learned that the MacBook Air could be updated with the Sandy Bridge CPU in June; this would certainly upset those who have already purchased a new model. I was considering buying a new Air now, but it is now best to hold off until the summer at least.

AppleInsider reports that Apple has been conducting a survey to discover just what customers want from the next model. Some of the questions asked were to do with 3G, which makes us wonder if the company is trying to learn if this is a feature that we would like in the 2011 MacBook Air? 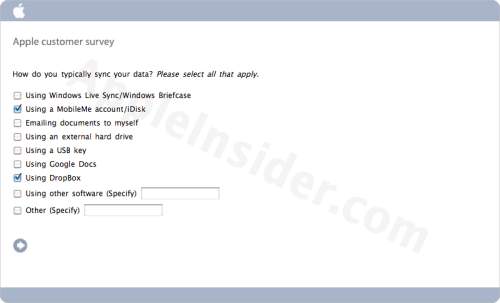 If for any reason there will be a 3G version, we do hope that you will be able to use one of your existing accounts from either your iPhone or iPad; it would not be fair to have to sign-up to yet another contract. Apple needs to think long and hard about this one, it we have to have three separate contracts then sales of the MacBook Air could begin to suffer.

Macgasm has looked into this subject in more detail, and believes that there is more to the idea of a 3G MacBook Air than meets the eye. Whether you agree with it or not is up to you; we are sitting on the fence for the moment?