There’s no denying that the biggest surprise during WWDC last Monday was the appearance of the all-new Mac Pro, and while Apple shared a few details with those who attended, many questions still remain unanswered. One thing we do know though, and that is Apple could set the trend for how other computer makers will design their desktop computers in the future, the question is, do we want them to?

The Mac Pro specs pretty much speak for themselves, but it’s the strange cylindrical design that has created the biggest debate, which we recently discussed. However, many questions still need to be answered, and so Mashable has gone out of their way to try and explain some of the new Mac Pro key facts to help better explain that 2013 design.

After the keynote those who attended WWDC got to have a closer look at the all-new Mac Pro, and even though they were not allowed to touch it, they did notice that the hardware has dictated the shape of the desktop, the main one being the thermal core, as it helps to dissipate the heat far more efficiently. 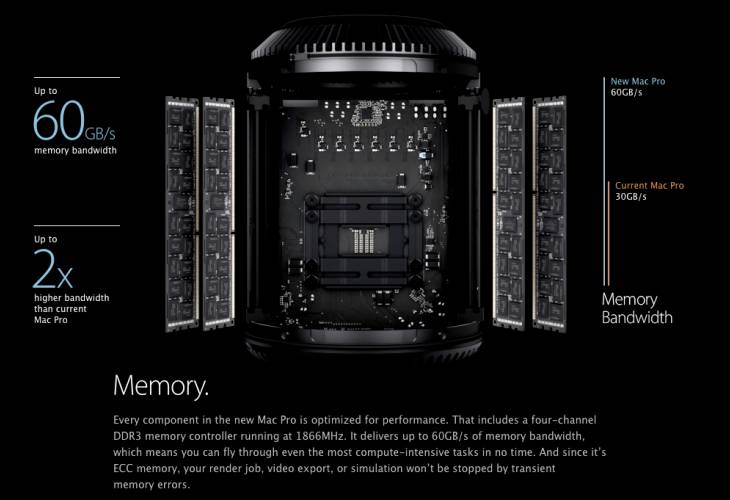 When you look down the center you will see the hardware, such as the CPUs and the RAM, and so the heat generated by these components will escape much easier thanks to this unique design. Mashable has since learned that Apple began with the design of the core, and the overall design moved on from there.

Looking at the 2013 Mac Pro, you would think that Dyson had a hand in its design, because of its fan sucking in air from the base and expelling it out of the top; it’s far better than any desktop design we have seen in the past.

The biggest Mac Pro design departure has to be its casing materiel, as it’s made from polished aluminum instead of plastic, and also helps to dissipate heat, along with offering improved looks.

Some of you may be wondering what the size of the all-new Mac Pro is, well we can tell you that it’s the size of a pro football, but don’t let the size fool you, as the 2013 model will be a powerhouse in terms of performance.

However, we do have a concern in regards to the 2013 Mac Pro price, as this new design will not come cheap, especially as it will be assembled in the USA.