There is a new Lizard Squad Twitter account with a group or user, which seems to be playing god with the status of Xbox Live and PSN today. They are taking both of these services offline, as they see fit and are even calling themselves “a dox god”.

You can find one of their latest tweets below that states, “10,00RTS and we will stop smacking #Xbox and #PSN offline”. This follows previous messages telling the 50,000 plus followers, “XBOX LIVE AND XBOX.COM #offline”.

If you own an Xbox One, 360, PS3, or PS4, you might be having problems signing in to the stores or playing games like Destiny, Call of Duty Advanced Warfare, or EA’s FIFA 15 today, which seems to be directly due to a DDOS taking online play down today. 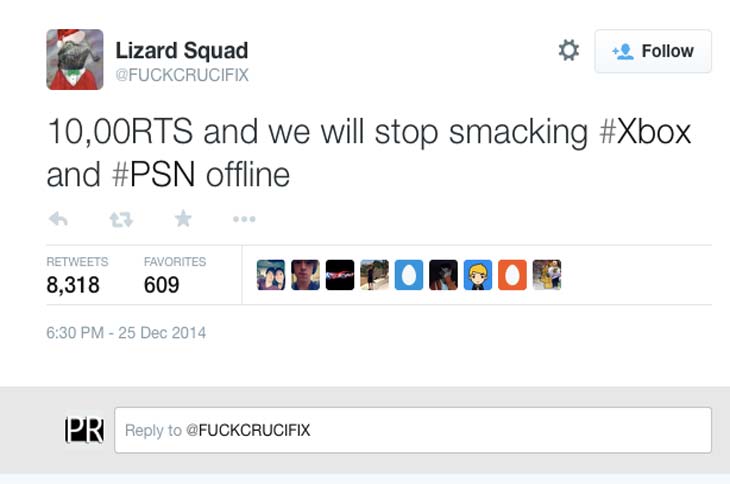 We cannot be 100 percent certain, but this Twitter account seems to be by those behind the outages on December 25, 2014. Christmas Day could see one of the biggest attacks on gaming services in years, and it’s certainly shaping up that way so far today.

Another tweet within the last couple of minutes states, “North Korea offline”. Again, it’s not clear what that means, but this is certainly a targeted attack at many online servers and one that shows those behind the Twitter account are capable of pulling this off.

What online servers are offline for you right now and if related to Xbox Live and PSN, what game are you having problems with right now?

You can read more about Xbox Live going down today here, problems with Destiny servers on Dec 25, and also issues with the PlayStation Network that wasn’t maintenance yesterday.