Another week and we have to report a new recall, and this time for several Hyundai and Kia models. The list of recalls includes six Hyundai and six Kia models, all for the same issue, and that would be for a faulty brake switch.

In total there are 1.6 million Hyundai and Kia models being recalled, which as you would expect not only comes as a huge blow to the car manufactures, but also the owners of those affected vehicles. For those with a good memory you will remember the 700,000 Hyundai and Kia vehicles for the same braking issue back in 2009, well this is to be added to that ever-increasing number.

The 1 million Hyundai Sonata, Elantra, Genesis Coupe, Santa Fe, Tucson and the Veracruz models along with the 620,000 Kia Optima, Rondo, Sedona, Sorento, Soul and the Sportage models built from 2007 to 2011 have the same malfunctioning brake switch, which causes the brake lights not to illuminate, and as a result could lead to an accident. Just imagine driving at spend and applying your brakes, only for the driver behind you not being able to see you are slowing down?

There are several other issues as well, which includes the cruise control not being able to apply the brakes, as well as the push starter not turning the cars over. As a result the NHTSA has had to issue a recall for all 12 models below, which will begin in June. The fix is a simple one, just the removal and replacement of the faulty brake light switch.

If you are driving behind one of those vehicles mentioned below then you had best keep a little distance, otherwise you could rear-end them if you drive too close. 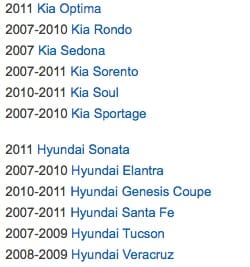