Although we’ve seen a few trailers emerge now for the much anticipated L.A. Noire game, none of them have given us a glimpse of real gameplay footage. However, Rockstar Games has changed all that, by releasing the very first L.A. Noire gameplay video.

The new trailer — which according to Mark Fajardo over on the justpushstart.com website has been called “Orientation” — gives gamers an idea of what to expect in the L.A. Noire game, which as we previously mentioned (here) is due to be released in May this year.

As Lorenzo Winfrey over at zoknowsgaming.com recently reported, the “Orientation” trailer is said to be just the first in a series of more in-depth gameplay trailers. The idea of this trailer is to give fans an overview of the L.A. Noire game’s core mechanics. 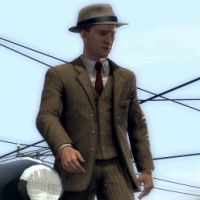 This includes the fundamentals of interrogating witnesses, searching for clues and classic action such as shootouts and brawling. The video also explains how players’ intuition cunning and detective skills are the key to making or breaking every case.

You can view the “Orientation” trailer via the justpushstart.com website.