When Apple revealed the 4th generation iPod Touch most people were concerned about the display, camera and capacity, however one thing that went pretty much unnoticed was its impressive battery life.

The new iPod Touch’s battery life is quite staggering, especially when you consider it takes just 2 hours for a fast charge (80%), and 4 hours for a full charge.

A full charge is said to give you 40 hours of audio playback or 7 hours of video playback, you are probably wondering what makes this possible.

Luckily the guys over at ifixit recently disassembled the iPod Touch 4G, you can see the three page teardown here, what struck me the most was the size of the battery, we have embedded a photo below showing its size.

According to ifixit this battery has a capacity of 3.44 watt hours, which combined with iOS 4 gives it superior battery life than one of its biggest competitors the Zune HD.

I do think it is getting to the point where devices such as the iPod Touch has more than enough battery life, do you? 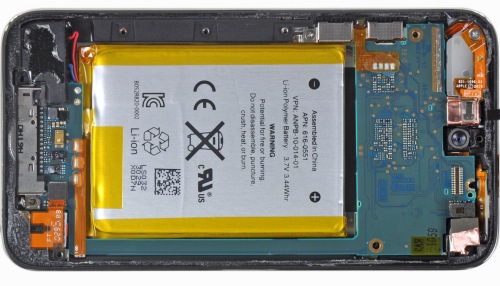