Last week we showed you some photos of the rumored new iPod Touch device, but now some new pictures have shown up – giving us another glimpse at that touchscreen capacitive home button. We want to know if you think the images are real or not.

First of all, take a look at this new image, which has been provided courtesy of 9to5Mac. They themselves believe that these images are fake, but you should be aware that it has been heavily rumored that the next iPod Touch, aka the 5th generation version, will include a touchscreen home screen, rather than the physical button that we’re used to seeing on the iPod Touch and also the iPhone. 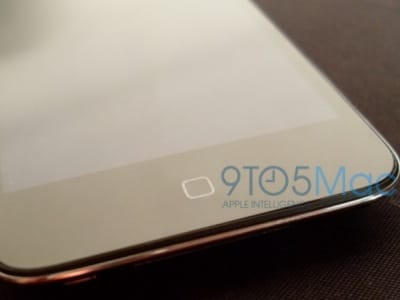 Even if this image does turn out to be a fake, it’s probably a very good indication that the real device will look something like this when Apple decide to unveil it – but will this be at WWDC 2011 this Summer, or at their Fall event afterwards?

What are your thoughts on a new iPod Touch with a touchscreen home button – Do you think it looks better or worse? In our opinion, it makes the device look a lot more sexy in our opinion. It this all turns out to be true, it will be interesting to see if Apple also include a touchscreen home key for the iPhone 5.