Considering all the recent iPhone 5 related news that we have been telling you about recently, we now have an interesting twist which you’ll definitely want to know about. How would you feel if the iPhone 5 ended up with a slide-out keyboard?

As reported from BGR, rumors have surfaced over at Apple.pro, who are claiming that Apple are now in the process of testing as many as three potential iPhone 5 models, with one of them including a slide-out keyboard.

Yeah, you are probably as surprised as we are on this one, as it seems almost unheard of for Apple to even think about putting a hardware keyboard on the iPhone as we all know they have grown to love their virtual one, and it pretty much does the job very well.

Take a look at the picture below, this could actually be an accurate design for an iPhone 5 with a keyboard, if Apple decides to go down that route – how does it look for you? 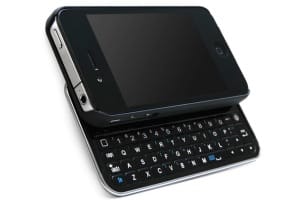 Personally speaking, we’re not too sure. If Apple does decide to include a keyboard, we feel they would have to offer a secondary model for those that don’t wish to use it. Or better yet, build it so the keyboard can be detached and stored away easily – now there’s a neat idea for you Apple.

Let us know your thoughts on an iPhone 5 model with a keyboard. Would it be a hit or not?