From the moment that Apple unveiled the iPhone 4 concept designers were hard at work coming up with what they thought the iPhone 5 would look like, but how different would the new 2011 model actually be from the current version? We thought we would take a look at a handful of the most popular choices so far, but what we feel will never happen.

Firstly we have a video of five iPhone 5 concept designs, not certain if any will make it to production but nice to see what is possible. You can view the embedded video below. One of the more plausible design ideas has to be the one that we came across on IntoMobile. They say that the design is “Ultra Thin”, but then also add that it is “Ultra Fake”.

We really like this one, but we are all in agreeance that it is just too thin and that Steve Jobs and the team would not be able to get the sort of technology and battery needed in such a thin design. Let’s not rule it out though, we could still see this concept enter production — give it another couple of years though. 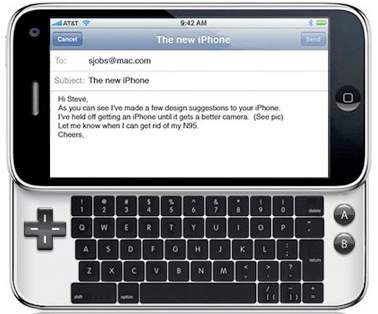 Tek3D also has four fifth-generation iPhone designs, but it looks as though the exterior is a step back. Maybe this is something that current iPhone 4 users miss about the design — I know I do not?

The first on the list is a new 2011 iPhone with a built-in projector; this does sound cool, but keep dreaming people. The second design hope is for Apple to offer more than just one color, yes there should have been two, but we all know the story with the White iPhone.

So the third is back to a more rounded design, that’s the one that we have the issue with the most, come on people try to be more inventive than that. The final concept is the idea of a Full QWERTY keyboard, again this is one feature that users of the iPhone have wanted since its launch in 2007, but not certain if it will ever become reality. We all know how Steve Jobs hates just one button, and recent rumors suggest that that could be going in the next design.

What would you like to see with the 2011 iPhone? What is your best concept design so far?