The worry of a new iPad mini 2 releasing with Retina display with a higher price has just been killed, and this is thanks to the current generation iPad mini gaining a price drop to $299.

Following on from Apple’s new iPad Air, they revealed a new second generation iPad mini with Retina display at the same price as last year ($399) while dropping the cost of its previous generation. This means people can pick up an iPad for a lower price than ever before. 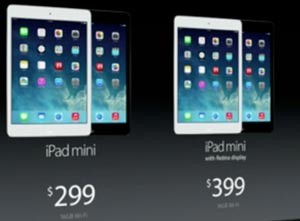 The new iPad range also featured in a new TV ad right at the end of Apple’s keynote event, so look out for this online and on television shortly.

It is fair to say the new iPad Air will receive a lot of the news coverage thanks to being the most powerful iPad released to date, but we want to highlight the new $299 price tag for the first generation iPad mini. This will help thousands of people own an iPad this Christmas thanks to the price drop.

Specs for the new iPad mini with Retina include an upgrade to the A7 chip that will offer 4 times the performance along with 8 times faster when it comes to graphics tasks. Battery life will stay at 10 hours; you will find an iSight camera at 5MP, an impressive FaceTime HD camera on the front, and MIMO support. Full technical specs will land on the official Apple store shortly.