We’ve noticed an image land on Facebook within the last 24 hours that seems to reveal the possibility of a new iPad 4, which could see a release date shortly after Apple’s iPad mini event in 2 days time. The photo can be seen on this page and shows that the new iPad specs have at least changed with a lighting port, although it could just be a slight refresh of the iPad 3 and this being the only change.

The photo doesn’t reveal any other changes, from what we can see, although if these images are the real deal then anything could be changed inside, so this has caused some upset with a number of existing iPad owners that purchased an Apple tablet this year. Nobody wants to see a 6-month product cycle, especially those Apple fans that only just upgraded to the model that launched this year.

You can see the Facebook profile that leaked this image here, which includes a couple of responses from fans although having upgraded ourselves to the 3rd generation iPad this year already, we find it hard to believe Apple would launch an iPad 4 (4th generation) so soon. If this image turns out to be from an official iPad update then it’s obviously a change to better support the new dock connector, which had been a major change for the iPhone 5. 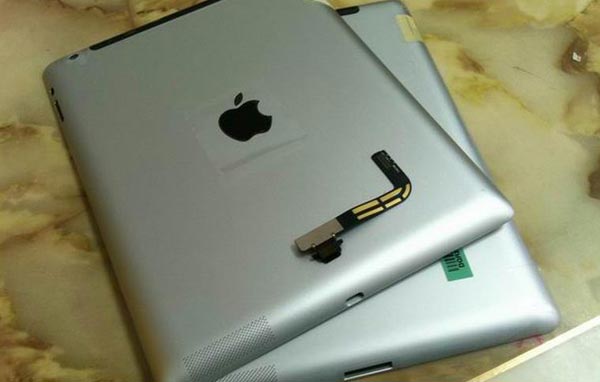 What iPad 4 specs would you like to see when the 4th generation Apple tablet finally arrives, or are you thinking about an iPad mini if the upcoming event reveals your ideal price? The above photo has started some people posting wish lists for what they want already, and this includes much better battery life, an A6 chip, an SD card slot, and other features that were missing from the 3rd-gen model. You can read about the problems Apple might have with balancing the iPad mini price and features in this article. There’s under 2 days to go until Apple’s Oct 23 iPad mini event starts, so we haven’t got long to find out what rumors are real from the growing list.