The new iPad 2 has only just been announced and we are just getting our heads round some of the great new features. The new tablet will now come with two new applications built in, FaceTime and Photo Booth.

FaceTime has been available for iPhone users since it was first launched, and now as the new iPad will have two camera’s it has the app built in. With just a simple tap you can instantly make video calls to someone who also has an iPad 2, iPhone 4, iPod Touch 4G, and Mac using Wi-Fi.

Using FaceTime is easy, just find whoever you are calling from your Favorites list, and tap the FaceTime button. An invitation will pop up on their device asking if they want to join you, when they accept the call begins. 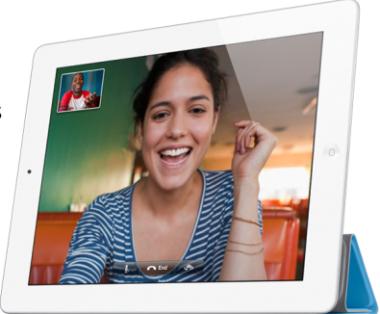 Next up is Photo Booth; this will allow you to take snapshots of you and your friends in funny and bizarre ways. This uses the front facing camera, and before Photo Booth takes your photo it adds a bright white light to your face. You can then see a preview before you take the photo.

You can add different effects which include making yourself look like an alien, twist up your face, make your photo look like a comic book character, and much more. Photos can be sent to friends in Mail, added to a contact, and everything is automatically saved to your photo library.