Almost all computer based devices and PCs have a touchscreen interface or some degree of touch capability nowadays. HP were the first to produce a touchscreen desktop PC that hit the market back in 2007. Now they have released two new touchscreen all-in-ones with a little twist or should I say pivot.

The new TouchSmart 9300 Elite Business PC and 610 possess some features unique to their predecessors. One of these is that they pivot 180 degrees and the other is they recline as far as 60 degrees into a more ergonomic and comfortable position for touch interaction.

This news comes from an article produced by Engadget. They report that the new PCs will also come with the latest software layer from TouchSmart which features Netflix, Hulu and Twitter apps. You can find what else comes with the new models listed in their full article, where they managed to get some nice images and a video of the TouchSmart in action. 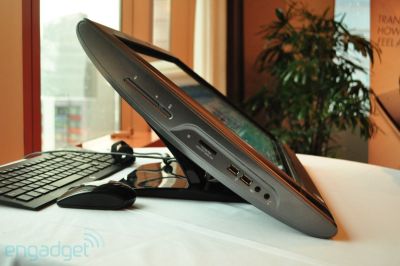 You can get your hands on the 610 as from February 9th, it will cost you $900. While the 9300 is expected out some time in May with the price as of yet not determined.

What do you think of these new models? Let us know your thoughts.