Many Halo fans aren’t too sure what to expect from the next Halo video game, this is because this time around we’ll be playing a game developed by 343 Industries instead of Bungie – recently the guys at 343 uploaded a video to YouTube which gives us a taster of what to expect from Halo 4, it has to be said that having watched the video we’re more excited about this game than we have ever been before.

The first look video has been embedded at the bottom of this post, it lasts over 4 minutes and we get to see lots of glimpses of what 343 Industries plan to bring to the game, one thing which is reaffirmed is Master Chief’s new armor – something which we spoke about in detail in this article. We have added an image below which shows Master Chief’s armor in Halo 3 alongside the new armor in Halo 4 below.

343 say that in Halo 4 they want it to feel like you’re controlling a heavy, powerful, yet athletic super hero when you’re controlling Master Chief, there’s a brief mention of new gameplay being added – however no further details were disclosed. Something else we get to see is the new HUD (heads up display), you can see a screenshot showing this below, 343 say that it’s quite similar to a fighter jet HUD, do you like the new look? 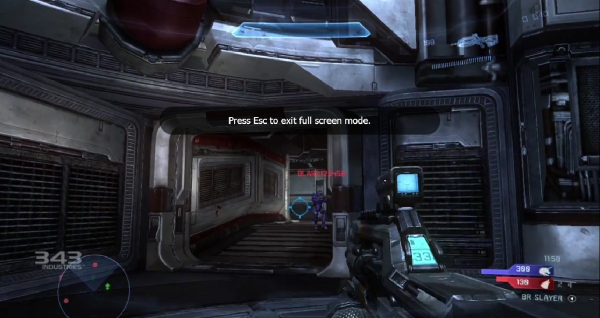 Some other things which get a mention in the video include a teaser toward’s the plot, there are no specifics, but we are told that the campaign will entail Master Chief fighting for something important against a bigger threat than ever before. At times in the video we get to see the use of facial tracking technologies which suggests that cinematic sections in the campaign will feel more immersive thanks to accurate expressions, this combined with more detailed visuals than ever before should combine nicely.

The video also reveals that all weapons, vehicles and enemies have been graphically overhauled and we can confirm that you’ll have the familiar Battle Rifle at your disposal with its precision sight and burst fire – you can see the new-look design below.

There are still a few more things to tell you, if you thought that Halo 3’s sounds weren’t quite making the most of your audio equipment we can confirm that the sounds of guns etc should be great in Halo 4 thanks to an all-new audio team who are hard at working capturing the all new sound effects. But that’s not all, we also know that 100 tracks have already been recorded by the orchestra.

It’s not just sound which is completely new, the multiplayer maps in this game are said to be built from scratch as well, so you won’t just see segments of terrain and building from previous Halo games “cut and pasted” into Halo 4, instead you are seeing completely new designs which take competitiveness very seriously. In the first look video we get to see two of these fresh new maps, one of which is called Warhouse and the other is called Wraparound. Warhouse is pretty intriguing, it’s basically an abandoned military base which surrounds a giant mech which is being built, as for Wraparound we don’t know a great deal, but 343’s Lead Designer (Brad Welch), tells us that it is a looping arena with lots of verticality.

That’s about all we can tell you about what’s revealed in the Halo 4 first-look video, however we must just point out that everything which we’ve told you is “subject to change” (343’s words not ours). Check out the video below and tell us if you spotted something which we missed.

Are you impressed by what you’ve seen? Do you think 343 Industries will deliver a better Halo game than what Bungie ever released?