Rockstar has been keeping completely silent on GTA V for PS4 and Xbox One lately, whilst also saying nothing on the status of the highly anticipated GTA V 1.18 update. Now though, we have a confirmation that new GTA V gameplay for PS4 and Xbox One will be revealed within hours.

It has been months since we last had the official GTA V trailer 2 for PS4 and Xbox One. Now it looks like Rockstar are ready to show off more of the game ahead of the November 18 release date and IGN could have the exclusive.

The site has sent out a Tweet, claiming that they will offer exclusive GTA V gameplay at 9am Pacific Time, 12pm Eastern Time and 5pm UK time on Tuesday November 4. 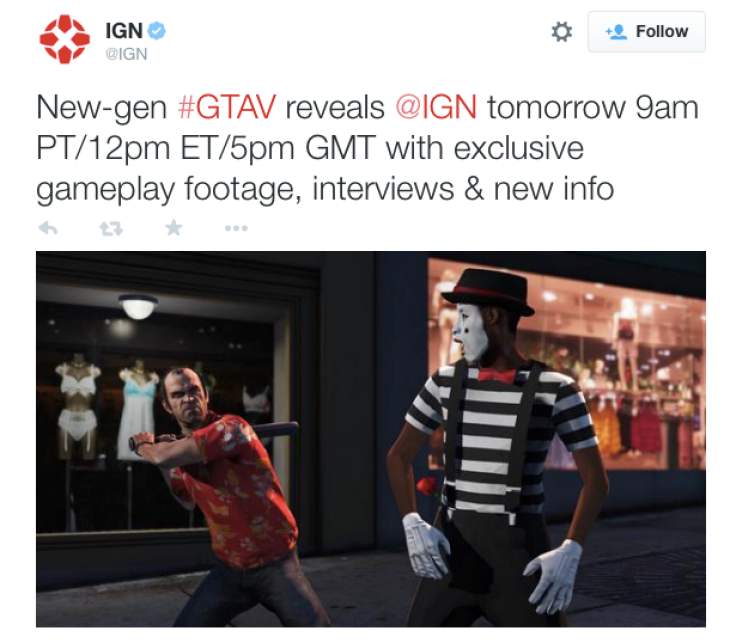 At the moment, there has been no update on Rockstar’s Newswire page about this new footage, so it could just be something that IGN will offer separately.

There’s also no indication that GTA V 1.18 will be coming, despite the fact that it’s a Tuesday and gamers will be expecting a new update to arrive for GTA Online after a disappointing Halloween update.

Either way, are you planning to pick up the game for PS4, Xbox One or PC? Let us know if you will be tuning in to IGN to watch the exclusive reveal.