When consumers heard of a new GoPro, they assumed it was for the Hero5. However, it is a little early for its release, and all made sense once we finally knew what the new model was. The GoPro Hero4 Session is the model in question and is waterproof, meaning you do not need to use a housing to use it in water.

It is all very well and good having a new model in the range, but we fear that some of you will be confused by the Hero4 Session price. This is because it is the second most expensive model behind the Hero4 Black. 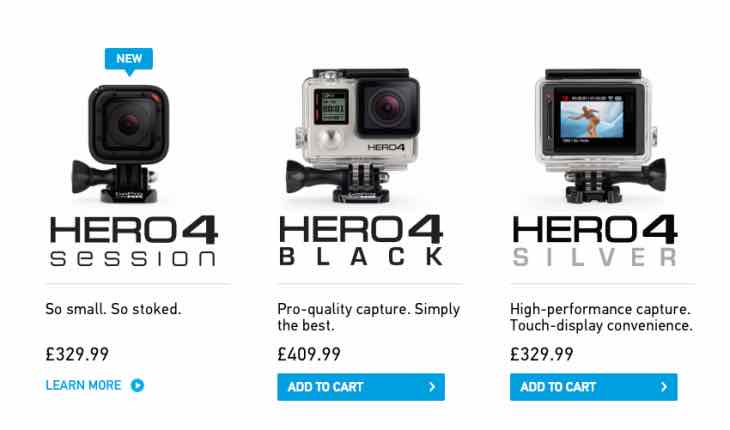 The price is £329.99 in the UK, the same as the Hero4 Silver, which does add to the confusion seeing as though it does come with limitations. Having said that, there is always a price to pay when cramming a huge amount of technology into a smaller package.

What are those limitations? Even though you do not need a waterproof housing, it will not be able to go as deep as those models with the waterproof housing. It might be 50 percent smaller and 40 percent lighter than other models in the range, but it is limited to just 1080p HD and not 4K.

However, do not let those issues put you off, as this smaller, lighter model will appeal to a different audience. This is because it will not be as bulky when attached to your head, vehicle, or whatever other object you choose to mount it too. The other benefit is that GoPro say its new Hero4 Session has far less wind noise, so we could expect to see quieter videos uploaded to YouTube.

Visit GoPro for more details on its new action camera, or check out the video below for a full test of the new model.