We were very excited to learn that TomTom had released four new Go Sat-nav models in the UK. However, the excitement was short lived when we learned the new GO GPS range still lacks one requested feature, third-party POIs. It’s such a shame to be missing this feature, as our readers have reminded us again and again that TomTom is letting them down by not offering such support.

The new generation TomTom Go range consists of four models, which are the GO 510, 5100, 610 and the 6100, and as you would have already figured out comes with different features and display sizes.

One of the most improved features that stand out with these new models are the new lifetime world maps, as well as speed camera services for life. Having these at no extra cost each year will save you a lot of money in the long run, especially if you have the same sat-nav for several years. 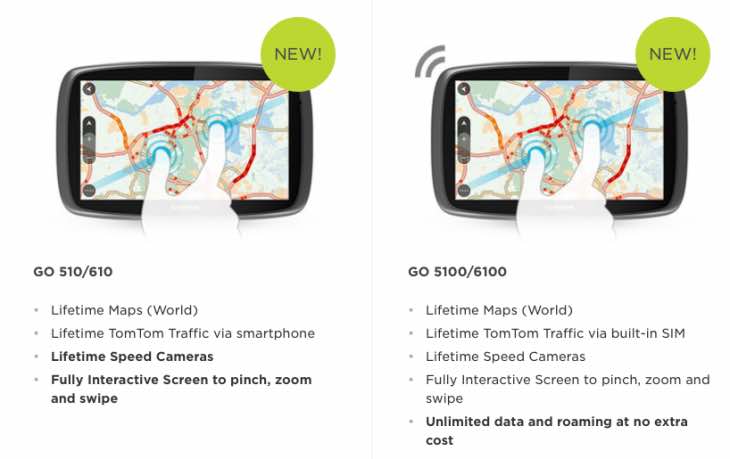 The other good news is that all four models will support TomTom’s new MyDrive service and all come with interactive display. Sizes range from 5 to 6 inches and the only other difference with the models is the fact that the GO 510 and 610 needs to connect to a smartphone in order to gain access to TomTom Traffic information, whereas the GO 5100 and 6100 do not.

Update: Thanks to a reader, we have now been told that TomTom had a typo and has since corrected this. We can now tell you that MyDrive is supported on the all-new TomTom GO 510, GO 610, GO 5100 and GO 6100.