We have more Final Fantasy info for you now, this time a brand new gameplay trailer for Final Fantasy XIII-2 which is just about to be released in Europe and the US. We also have a collection of new screenshots to share with you as well, these ones being captured with English language.

The last time we had any footage for Final Fantasy XIII-2 was when Square-Enix released their monster trailer for the game, confirming to fans that FFXIII-2 will give players the ability to capture monsters and train them up for use as a party member.

Now though, the company has released a trailer which focuses on a much loved character from the entire franchise – the moogle. Those cute little furry creatures have made an appearance in almost every Final Fantasy game and Square-Enix has once again made them an integral part of Final Fantasy XIII-2. You’ll be able to use moogles to search for rare treasure items, in some cases even throwing the moogles into random areas in hope of picking up an item – sounds bizarre we agree, but watch the trailer below and you’ll see what we mean.

For another Final Fantasy first, the mogs will also have an effect in battle as well in Final Fantasy XIII-2. Using a feature called ‘Mog Clock’, the mogs can give players a boost in battle with a pre-emptive strike, but on the other hand this feature can also give you a penalty by losing the first strike.

On a side note, a new collection of screenshots for the English version of Final Fantasy XIII-2 can be viewed over at Electronic Theater. There’s 17 images to browse through in total, one of which confirms the return of another infamous Final Fantasy character – the cactuar. It will be interesting to see if Square-Enix has made it so players can capture the cactuar and use it in battle as an ally – those of you who played Final Fantasy VIII will appreciate this more. 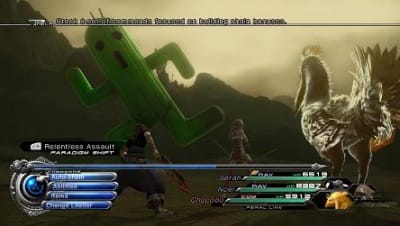 Are you picking up Final Fantasy XIII-2 at launch? It certainly looks very impressive after the well-documented criticism of FFXIII.