We have yet more FIFA 12 details to share with you now, and after bringing you information regarding stadiums, face graphic comparisons with PES, a career mode trailer and a complete trophy list, we now have a brand new gameplay trailer for you to check out before the game hits shops.

And this is no ordinary gameplay trailer either. For some briliant reason, the guys down at EA HQ have decided to recreate the infamous World Cup incident in which Holland’s Nigel De Jong performed what can only be described as a Bruce Lee style Kung Fu kick on Spain’s Xabi Alonso.

The only differences in the FIFA 12 trailer, is that De Jong is now in his club colors of Manchester City, while his poor victim is none other than his international teammate Rafael Van Der Vaart. Also different is the type of takedown as it appears that De Jong has extended his arsenal of moves over the last few months, or he’s been watching a lot of wrestling on TV. 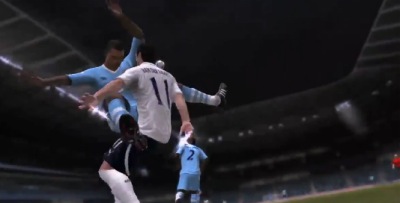 You can see the funny clip from 0.25 onwards, don’t forget to pause it and play in slow motion so you can see it up close. As for the rest of the trailer itself, it is mouthwatering stuff, and if you previously were unsure as to whether or not to pick up FIFA this year, this trailer should give you another indication that it is going to be money well spent.

You’ll also be able to see Nani’s trademark celebration as he scores for Manchester United while Barcelona fans will enjoy seeing a crunching in-game tackle on an unsuspecting Real Madrid player. We’ve included the video for you below, courtesy of GameSpot, let know what you think of the De Jong incident. FIFA 12 hits shops on multiplatform on September 27th in the US, September 30th in Europe.