We have a treat if you are planning to pick up FIFA 12 later on in the year, as just days after we brought you the very first gameplay trailer for EA’s latest installment, we now have a batch of tasty screenshots for you to enjoy, giving you a further look at just how great the graphics are looking this time around.

As seen in the title above, the screenshots also give a first look of Fernando Torres in his new Chelsea attire. Liverpool fans may want to turn their heads in disgust over this, but it’s a must see for general fans of football. 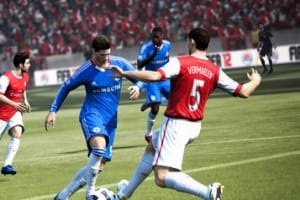 There are 11 new screenshots in total, and they have been uploaded courtesy of Eurogamer. Another screenshot also shows off man of the moment Lionel Messi performing a bicycle kick against rivals Real Madrid, and another shot amusingly shows Barcelona’s David Villa attempting a ‘De Jong’ Kung Fu kick on Real Madrid’s Iker Casillas – we wonder if Xabi Alonso was watching?

Nevertheless, the game is looking pretty stunning and it’s easily a must fan for those of you who enjoyed FIFA 11. It will be interesting to see what Konami has in store for football fans in terms of Pro Evo 12, but at the moment we’d say FIFA 12 are clear front runners again. Check out the screens over at Eurogamer above and let us know your impressions of FIFA 12 so far.

Are you digging Torres in a Chelsea shirt or not?