Yes it’s that time of year again when the wives get neglected and the TV remote is taken control of by the football fanatic of the house, typically the males, as the Premier League football season kicks off once again in the UK. Almost just as excitingly it seems to commemorate the opening day, EA have released a new FIFA 12 image that features two top Premiership sides in their new strips for the season.

As you may already know by now, FIFA 12 is due out at the end of next month. During the buildup we have seen various screenshots and trailers which feature the players and the new gameplay, except there have been few details revealed which actually feature the official kits which the teams will be wearing for the duration of the season.

That’s what makes this new image, which can be seen below, so unique and therefore exciting. The image itself consists of Manchester United’s Wayne Rooney, hair transplant and all, taking on and seemingly beating Chelsea’s John Terry as he attempts to score past Chelsea goalkeeper Petr Cech. You can also see Chelsea’s Branislav Ivanovic in the background, all players are in their home jerseys.

It is difficult to see whether the game is being played at Manchester United’s home ground, Old Trafford or Chelsea’s home ground, Stamford Bridge although the majority of the crowd which can also be seen in the background are wearing red, suggesting that it would be a United home game. As EPL TALK explains in their article, the graphics have improved significantly from the previous FIFA title, with particular attention been paid to the realism of the crowd’s look.

Check out the image for yourself below. You can also find a larger image by clicking the link above. What do you think of the image? Are you excited that the Premier League is finally kicking off again? 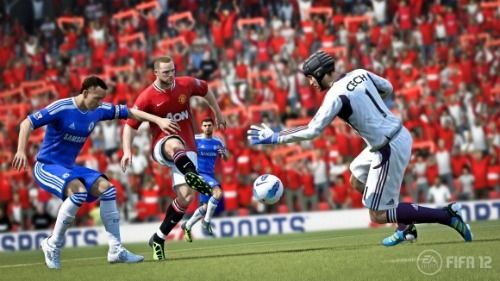