The tablet market is a lot like the TV market, as there are so many different brands, sizes and models, and so choosing the right one is often a very difficult choice. However, sometimes things are made that little bit easier when a certain tablet stands out against the rest. Some would say that several of the Samsung models do, as does the iPad Air and Pro. However, there is also the Ellipsis 8 and 10.

Some of you will wonder who is Ellipsis, and we can tell you that this is a brand exclusive to Verizon. From what we can see of their design, they are better than budget models, although not high-end either. However, the design of these tablets seem to defy their price, although maybe that is because Verizon is trying to push them hard seeing as though Black Friday and Cyber Monday is upon us?

Before we look over the Verizon Ellipsis 8 and 10 specs, we thought we would advise you that these tablets might not be ideal if you travel internationally. This is because they have limited capabilities outside of the US, so you might want to consider another model.

Choosing between the two will come down to what you need the tablet for, and also price – something we will get to in a moment. 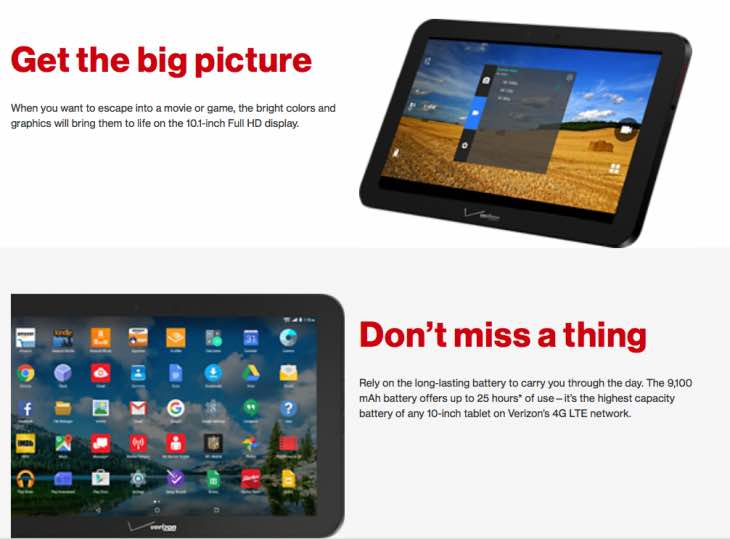 Then there is the Ellipsis 10, which does have more to offer, such as up to 38 days standby time, 25 hours usage, and also the same 5-megapixel camera. While this night come with the very same 1.5GHz Quad-Core Processor, it has larger capacity battery which is why those times look better than its smaller sibling.

As for the Ellipsis 8 and 10 tablet pricing, there are several options available to you. However, we do know that Verizon will be selling the smaller model for $49.99 with a free $25 Google Play credit when purchased with a 2-year contract. The larger of the two does seem the better deal, as this is also $49.99 on the same contract, although there is no Google Play credit.